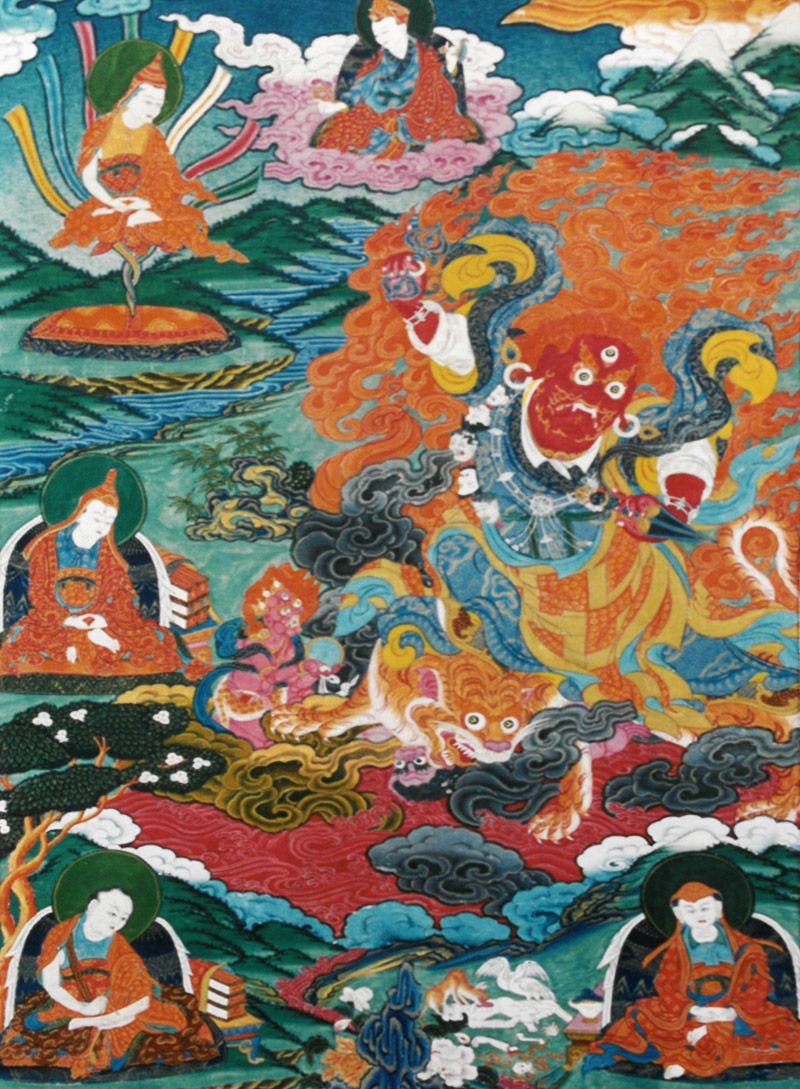 Among the eight manifestations of Guru Rinpoche, the last one to manifest was in the extremely wrathful form of Dorje Drolö in the borderland of Mön (Bhutan), in the cave of the tiger’s nest. In this form, he subjugated all the negative classes of ferocious beings, such as yakshas, male and female spirits (gyalposand senmos), demonic samaya breakers (damsri), and local land spirits, and appointed them as terma protectors. Then for the benefit of future generations, all the teachings of Dorje Drolö were classified into four categories and transmitted in their entirety to his direct disciple Drogben Kyeuchung Lotsawa (Dudjom Rinpoche’s previous incarnation). Those four classes were:

The first three cycles were hidden as earth termas with different ritual objects and substances. The fourth cycle is the most essential heart essence, and so it was too precious to hide in the earth. Thus he transmitted it directly through mind to Drogben Kyeuchung Lotsawa to reveal at the right time in the future.

Dudjom Rinpoche, Jigdral Yeshe Dorje (1904-1987), did notreveal the first three cycles because of unfavorable time, circumstances, and people, but when he was doing a short retreat on Dorje Drolö at the age of 13 he saw clearly the fourth cycle as a mind terma. Later when he was 24 and doing another retreat of Dorje Drolö, he discovered the complete cycle of Dorje Drolö as a mind terma and he practiced this secretly until he was 50 years old. He transcribed this terma only after that, at the request of the great nagpa practitioner, Gyurmed Yonten Gyatso.