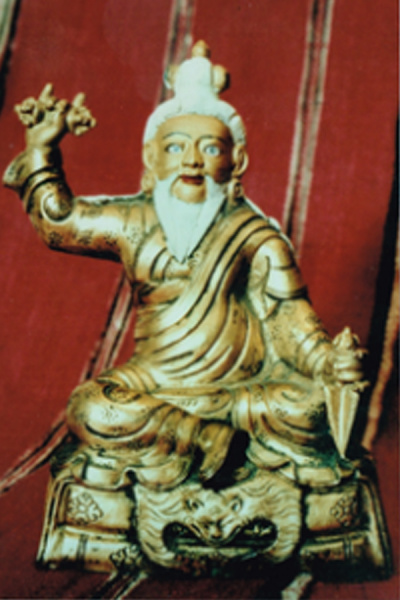 Whilst Traktung Dudul Dorje (the fourteenth in the line of incarnations of Kyabje Dudjom Rimpoche) was enjoying the feast of prosperity of Guru Rinpoche’s dharma in the Palace of Lotus Light, Guru Rinpoche personally asked Dudul Dorje to go to eastern Tibet in order to serve the faithful by petition of his spiritual consort, Yeshe Tsogyal, who said: “Amongst your disciples, three thousand people with fortunate karmic connections with you will arrive. More than 500 excellent ones who will attain enlightenment in their lifetimes. The twenty-five Kings and Subjects will come and help you. Ten Tertons will appear with you also and seven hidden masters will be born as your sons and grandsons.” The Great Terton Dudjom Lingpa, also known as Garwang Dudjom Pawo, was thus born in 1835 in the Lower Valley of Ser in Eastern Tibet, amid the rays of rainbows. His father was Aton of the Nub clan of the Ah Chak Dru lineage, whilst his mother was Po-Dzong of the Mutsha-ga lineage. In the secret sense, his body was the manifestation of Drokben Khyechung Lotsawa (one of the first 25 disciples of Guru Rinpoche), his speech was the manifestation of Yeshe Tsogyal and his mind was the manifestation of Guru Rinpoche himself. Dudjom Lingpa was born with the gift of great wisdom and spiritual powers. From his early infancy onwards he manifested great natural powers which only a few great and exceptional masters could display. Although he lived amongst ordinary people most of the time, Dudjom Lingpa had hardly been separated from the Buddha Fields. He received teachings and transmissions from a limited number of human teachers, particularly from Lama Jigme, Lama Jayang, Kathok Chak-tsa Tulku and Patrul Rinpoche. Nevertheless, he received countless and unceasing teachings from the diverse buddhas and enlightened beings in his constant pure visions. In fact, the armies of Buddhas, enlightened Beings, Dakas and Dakinis were constantly protecting, preserving and nourishing him both spiritually and physically. Dudjom Lingpa was endowed with a solid body, dark skinned – of a ruddy brown, a semi-fierce face together with very wide-open eyes of great scope. He often dressed in tantric white tunics and ornaments and earrings. He usually wore half of his long hair in a bun, letting the rest of his hair hang loose. During his lifetime, Dudjom Lingpa confronted many obstacles from various negative forces, but he was able to transform them into support for the diffusion of the Holy Dharma. He himself was not in a healthy state during his final years, but he managed to cure many sick people through his spiritual power, sometimes, even, with just a gesture. Whilst Dudjom Lingpa was looking straight ahead, even his closest disciples did not dare walk in front of him, due to the great power and strength of his staring eyes. It is said that the secular people of Golok prayed with the words: “Oh! Dudjom’s body,” instead of the customary prayers of praying with the body, speech and mind of the Lama. This highlights the great charismatic presence of his body as something quite extraordinary for the village. At the age of 25, amid the rocks of Ba-ter of the Mar Valley, Dudjom Lingpa revealed the prophetic guide (kha byang) which held all the instructions of how to discover and reveal his own treasures (ters). In the same year, with the direction of the prophetic guide, Dudjom Lingpa began discovering and revealing his own most important earth treasures from Ngala Tak-tse, the Ser Valley. From then onwards, Dudjom Lingpa had completely discovered twenty five volumes of these occult teachings, hidden in the 9th century Guru Rinpoche himself, as well as many sacred objects as Mind Treasures (Gong Ters) and Earth Treasures (Sa-Ters). These came to be known as the new treasures of Dudjom (Dudjom Tersar). It is said that Dudjom Lingpa was invited by his famous contemporaries Jamyang Khyentse Wangpo and Jamgön Kongtrül the Great, to include his new treasures (Tersar) in their collection of the precious treasure of Termas (Rinchen Terdzo), but he politely refused this kind offering saying: “Wheresoever the Rinchen Terdzo reaches, exactly the same will happen with my Tersar”. Apart from his brief visits to the Dza-Chukha Valley, Dudjom Lingpa spent most of his life in three known principal places: the Ser Valley, Do Valley and Mar Valley in eastern Tibet. At the age of 46, Dudjom Lingpa migrated to Lama-Rong and other places in the upper Ser Valley. Finally, at the age of 54, he moved to the Li Gorge, in the High Do Valley, where he built the Dartsang Kalzang Gon shrine, which would become his home for the rest of his life. Towards the end of his life, it was Dudjom Lingpa´s intention to make the sacred land of Pemako in the Kongpo Valley in central Tibet known and visited. This is one of the four main hidden Lands blessed by Guru Rinpoche, as a hideout for the faithful of the Dharma during Dark Times. But, as he was unable to do this, Dudjom Linpa prophesised that his successor would be born there and would reveal himself. He also prophesised that his successor, by way of Dudjom Lingpa would liberate thousands of millions of beings who encountered him by sight, acknowledgment, touch and experience alone, and that they would be reborn in the kingdom of Shambhala. With this, Dudjom Lingpa passed away in 1904 and was reborn as Kyabje Dudjom Jigdral Dorje (1904-1987), the second Dudjom Rinpoche, in Pemakod. Dudjom Lingpa had eight sons:

Apart from this, there were thirteen disciples of the Great Terton Dudjom Linpa who attained the rainbow body and others from his lineage who attained the same, as recorded by Kyabje Dudjom Rinpoche in his work The Nyingma School of Tibetan Buddhism, Its Fundamentals and History (translated into English by Gyurme Dorje and Kapstein Mateo and published by Wisdom Publications, 199 Elm St., Boston, MA02144, EE.UU., 1990, Vol. 1, p.919).