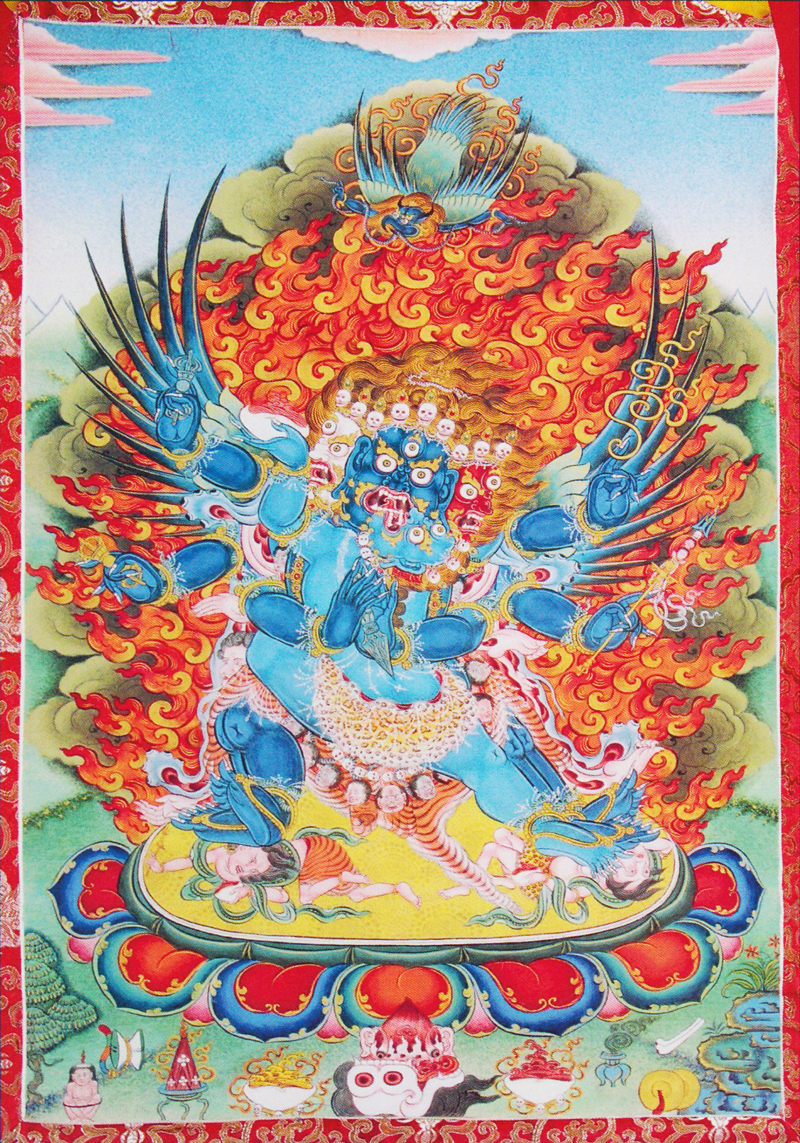 Generally, according to the Tibetan tradition, Buddhism is divided into the three yanas of Hinayana, Mahayana, and Vajrayana. According to the Nyingma School, Vajrayana is further divided into the three outer yanas of kriya, upa, and yoga, and the three inner yanas of maha, anu, and ati. This Namchak Putri cycle belongs to the three inner yanas, but it is mainly based on the mahayoga. Within this there are two sections: the tantra section and sadhana section. The sadhana section has eight cycles, and among the eight this terma belongs to the enlightenment activity of the buddhas.

The Nyingma School is divided into the oral transmission lineages and the revelation transmission lineages (kama and terma). Within the terma tradition there are earth and mind termas. Earth termas are classified according to the location where they are discovered. Termas in general are also named according to the time, so termas are said to be either new or old. Furthermore, termas are called either major or minor depending on whether it is a complete revelation or not. The term major terma means that only by this terma teaching, the practitioner can attain full buddhahood. This Namchak Putri cycle is an eastern, new, major terma transmission.

Originally the Vajrakilaya tantra was taught by Buddha Vajrasattva in the pure Akanishta realm and in different cemeteries to the ten wrathful Buddha families in order to tame the beings that could not be liberated through peaceful activities. It was compiled by Vajrapani and Dakini. Through this practice, Dakini Dewai Khorlo and Acharya Prabhahasti vanquished the four demons and attained the great Mahamudra stage of Vidyadhara. Since that time many masters have attained ordinary and extraordinary accomplishments through this deity.

This Namchak Putri Kilaya cycle was revealed by Guru Rinpoche when he was in the borderland of Tibet, called Mön (Bhutan), in the cave of Senge Dzong, according to the request of Dakini Yeshe Tsogyal and Drogben Kyeuchung Lotsawa, Guru Rinpoche manifested the entire mandala of Vajrakilaya in the space and conferred the initiation to them and some other close disciples. At that time, Guru Rinpoche transmitted this cycle completely to Drogben Kyeuchung Lotsawa with prayers, and then Dakini Yeshe Tsogyal put this cycle into secret dakini scripture and hid it in Eastern Tibet in the rock called Shodrak Dorje Drak.

In accord with the prophecies of the great terton Sangye Lama (11thcent.) and Dudul Rolpa Tsel (18thcent.) and many other prophecies that indicated his time, name, place, and individual marks, finally Dudjom Lingpa (1835-1904) appeared at the right time and he revealed this terma at the age of 25. For six years, he kept it very secret. Then at the request of the dakini who protects this terma, Dudjom Lingpa transcribed the yellow scroll of dakini script into the Namchak Putri volume. At the time that he was transcribing this, many auspicious signs appeared to the public.

This terma is a very direct revelation. It destroys the inner five poisons and the outer obstructers, such as spirits and enemies. Through this practice, the two accomplishments will be granted swiftly for the benefit of the entire world and all beings.